When I asked my Instagram followers to tell me the kinds of things they wanted me to blog about, one of the things I saw was that people want to know what the day-to-day of my life looks like right now, with working from home and keeping my 6-month-old home full-time.

I admit that I put this one off for awhile because it was pretty overwhelming. Iseemed like a lot of work to track my whole day! I kept telling myself, “Well, today wouldn’t be a good day to do it anyway. It’s not a typical day because _____.”

I used that excuse for a solid two weeks before realizing that every single day had some kind of nuance to it. No two days look exactly the same, and that’s the reality of working from home with a baby! That’s what keeps it interesting, and I’m finding that that’s what people want to see.

I decided to begin tracking my day when I got up at 3:50am with Kate and thought, Yep, this is what it’s really like!

Just a couple of notes-

Day in the Life

At 3:40am, I woke up to the sound of Kate crying. She sometimes sleeps through the night, but more often than not wakes up around 4am to eat and then go back to sleep for a few hours. I nursed her and put her back in the crib, and I was back in bed by 4:10.

I woke up again around 6:10, and my husband had already gotten Kate out of her crib and dressed her for the day. She was playing on her play mat in the living room while he made her a bottle. I made some coffee and drank a cup while he fed her.

At 6:50, Thomas left for work and I played with Kate while I finished my coffee. After about 30 minutes, I noticed her getting sleepy. I changed her diaper, put her in her sleep sack, and rocked her for a few minutes before putting her down for her first nap of the day.

After that (at around 7:35am), I quickly made our bed, reheated some coffee, took a load of laundry downstairs and started it in the washer, and sat down at my desk to take care of some medical billing issues.

By 8:05, I was working on my Disney gift guide blog post. I added a few more products and began creating the featured image (which involved taking all 10 product pictures, removing the backgrounds, and arranging them on a blank canvas in Canva). I wrapped that all up at around 8:50, because I needed to be logged in to school by 9am.

Kate woke up right as I was signing in at 8:55. (Of course!) I brought my laptop upstairs and watched a YouTube video on Google Classroom while I fed her some oatmeal.

Around 9:20 (as my stomach was growling), I realized that we were completely out of breakfast items (because we really needed groceries), so I packed up Kate and we drove through Starbucks for a sandwich and some more coffee.

(While I was out, I had also planned on stopping at school to pick some things up but needed to reschedule because the person I needed to see was out of the office, so I had to do that on another day.)

We were back home by 10am and I gave Kate some independent playtime while I worked on an activity for my first graders in my Google classroom. This particular activity was pretty involved as it was a name spelling drag-and-drop, so it consisted of making a different editable worksheet for each student. I am still learning and getting used to Google Slides, so this activity took up most of my working time today!

By 10:40, Kate was crying and showing signs of needing another nap. I gave her a small bottle while still working on the class activity, put her in her sleep sack, and put her down for another nap upstairs in her crib.

At 11am, I was back downstairs in my office, watching some professional development videos. I also got my new school-issued webcam set up on a tripod. Kate was not sleeping yet, but she seemed to be settling down in her crib so I kept working… that is, until around 11:30, when I realized that she wasn’t going to fall asleep!

I went upstairs and got her from her crib, grabbed some toys and a blanket, and set her up next to my desk so she could play while I continued working on the class activity.

She played next to me until about 12:10, when I put her back into her sleep sack and placed her in the pack and play that sits behind my desk chair. I turned on some white noise for her on my iPad, put on my AirPods so I could watch my videos without disturbing her, and kept working.

Kate finally fell asleep around 12:30 and gave me half an hour of uninterrupted work time before waking up. I nursed her and then we went upstairs so she could play on her play mat and I could grab some lunch and refill my water cup. (I typically take a break for lunch, but since I had gone to Starbucks earlier I decided to work through my break.)

At around 1:20, we went back downstairs and she continued playing with her toys on the floor while I kept working on the same student activity. Several times, I got down on the floor to engage with her for a few minutes at a time.

By about 2:15, she was acting sleepy (and GROUCHY), so I gave her a small bottle and placed her in her sleep sack. I put her into the pack and play to let her roll around and play for awhile while I kept working. She was realllllllly struggling to fall asleep, but since she is sleep trained and knows how to put herself to sleep, I just let her work it out while I (finally) finished the class activity.

I worked a little later than usual, since I had been so distracted throughout the day, but I finished up and checked out from school at around 3:40pm.

I (VERY QUIETLY) put away my work computer, stretched, went back upstairs for some water, and then came back downstairs, planning to work on my blog post until Kate woke up… but she was awake when I came back down to my office.

I snuggled my sleepy girl for a few minutes and then we FaceTimed my mom to say hi. After that, we came upstairs and I fed Kate a bottle. By 4:20, she was happily playing on her play gym. I washed up the day’s bottles and a few dishes before Thomas came home.

We played together on the floor (peek-a-boo is one of her favorite activities right now, along with tickles) until Thomas came home, and then I sat on the couch and spent some time engaging on Instagram while he played with her on the floor.

Thomas bathed Kate, gave her her last bottle for the day, and put her to bed while I cleaned up the upstairs and got dinner ready. (Crunchy tacos!) As much as I want to say that I was incredibly productive while I waited for the tacos to finish up… in reality, I laid on the couch and just mindlessly scrolled through social media for a few minutes until the oven went off. Whoops!

After dinner, Thomas and I both cleaned up the kitchen. Then, we went back downstairs to the office (which we share) and both worked for awhile- Thomas watched a video for his writing class while I completed my Disney gift guide. I already had the body of the post finished, but I re-checked all of the links (which was great because one of them wasn’t working!). I imported the image I had finished earlier and scheduled the post to go out at a specific date and time. I then messaged the other 9 shops whose products were being featured and let them know when the post would be live.

Once that was finished, I had a couple of Etsy messages and Instagram DMs that needed responses.

I then began working on a new blog post (this one, actually!) but at that point was so exhausted that I decided to stop.

I spent a few minutes listening to an audiobook (Embrace Your Weird by Felicia Day) and taking notes before deciding to turn in for the day.

I came upstairs and pumped while watching TikTok (a guilty pleasure!) and then went to bed at around 9:30.

So, there you have it! A day in the life of a pre-school-year teacher who is working from home while working a business on the side.

Now that school has started, I do plan to do an updated post within the coming weeks!

So, do our days have any similarities? I would love to hear! Drop me a comment and let’s chat!

View all posts by rebeccafletcherdesigns

When you have a strong brand voice, when you discuss the same topics (even ones outside your scope of work), when you consistently sprinkle f-bombs like candy or have a catchphrase that you end every post or podcast with, you’re solidifying your brand and helping it stick in your ideal client’s mind.
Marketing is like being invited to dinner. Branding is what makes you say yes to the invitation.
One of the best ways to create consistent content is to set aside a chunk of time every week or month to brainstorm ideas.
⭐️ H A P P Y B I R T H D A Y ⭐️
When potential clients see that you have yourself put together and are organized in your own business, they are more likely to trust you to help them accomplish their goals! Think about it - would YOU hire a hot mess express to help you in your own business?
It may be cloudy, cold, and icky outside... but it’s ALWAYS a beautiful day to go after your dreams! My word for 2021 is “forward” and I am trying my best to do at least one thing every day to move my business forward. 😉 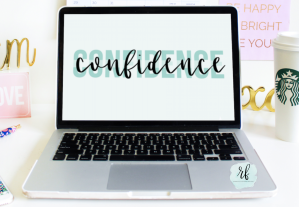